We love deaf dog success stories so we were very excited to hear from Vicky  Darnell to give us an update on her three deaf dogs and one hearing dog. We love when deaf dogs rock their competition titles. We have been following the Darnell’s ever since they adopted their first deaf dog Zima when they sent in her Happy Tail and Canine Good Citizen story. Wow talk about a couple stepping up and making their dog training a priority and now they even have the neighbors competing with their dogs!

We hope you love Zima, Chance and Nitro’s Competition Wall of Fame story as much as we do here at Deaf Dogs Rock. Thanks Vicky for taking the time to write up this story and share it with all of our Deaf Dogs Rock readers. According to my deaf dogs Nitro, Bud, Bowie and Cornell, you all ROCK!

Our Three Deaf Dogs Rock! Deafies representing!  It’s been a big year at the Darnell Den, where the pups are all about bringing home da bling.

While Mac isn’t a deafie, she did start us on the slippery slope of our dog addiction and she deserves due credit: her and her Daddy earned their Elite Nosework Title in UKC.

Chasing right behind Mac, deaf dog Chance (black lab) and Zima (white bully) earned their Superior Nosework Titles in UKC. Our deaf Labrador Chance earned his title with our neighbor as his partner  (Chance has overcome many issues with men to compete in the sport and be such a good partner). Zima our deaf white bully earned her title with a lady who has never worked in the sport and doesn’t usually run dogs! Both pups are great team mates.

Our deaf bully Nitro (white with brown eye patch), in true Nitro fashion, “Kramer-ed” herself through the doorway to earn her Advance Nosework Title in UKC and her NW1 in NACSW.
We have big plans for our delinquent bunch of misfits this year which are 1. Finish our trick titles. 2. Introduce our pack to agility, dock diving and lure coursing. What great things can our pups do to show the world they are just like other hearing dogs? We will be sharing and promoting all their adventures soon.

Jeff and I are thrilled to know and be a part of promoting how amazing deaf dogs can be and how much they rock! We could not be more excited to be a part of raising awareness about the abilities of deaf dogs.
While we never planned to be advocates for anything (it wasn’t planned, it just happened that way), we are excited to educate people. To see the growth in love, participation and expectations of deaf dogs makes what we do worth every effort.
See, we started out just wanting a hunting dog. Mac, our black lab, was fun and easy to train. She was driven to learn and please. Everything we tried to teach Mac, she learned with ease and grace.
Jeff wouldn’t hear of having a deafie in the house. He just didn’t think it was possible to teach a deaf dog, much less have a deafie that would ever participate in any of the sports we do.

Zima wasn’t home 10 minutes before she stole Jeff’s heart – and whether she ever participated in competition or not, she was his “little princess” and she wasn’t going anywhere. Much to his surprise she learned scent work, hunting, dock diving and tricks.
Through a rather odd series of events, and often at the most inopportune time in our lives, we adopted two more deafies to round out our crew at 4 pups total (1 hearing, 3 deaf). Chance came to us in June of 2014 and Nitro came home in August of 2016.
I can honestly say, the inability of my dogs to hear has never been an issue in training. My deafies are just as smart and driven as hearing dogs (and sometimes far more stubborn!). The greatest challenge I have faced is learning sign language for myself.
I took a sign language class to better communicate with my pups, but the truth is I had already established a set of signs (not exactly proper ASL), but they work—and that’s the beauty of dog training. My dogs learn quickly as long as I am consistent with the sign I give and the expected behavior.

It is always a great point of pride when someone approaches me after a competition and says, “I had no idea your dog was deaf!” There is no greater compliment you could pay us. That is the point of what we do—deaf dogs *are* just like hearing dogs. They can learn, they can do tricks, they can dock dive, do nosework, hunt, compete in agility and rally—and they will be the best snuggle buddy you’ve ever had! 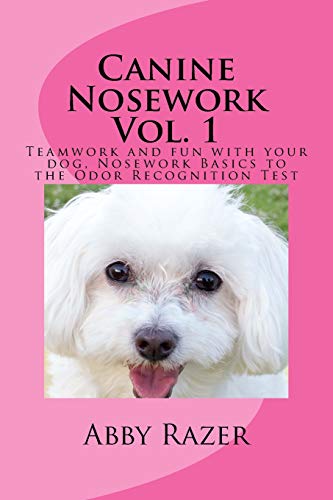 Amazon.com
Canine Nosework Vol. 1: Teamwork and fun with your dog, Nosework Basics to...
$15.00
VIEW THIS ITEM 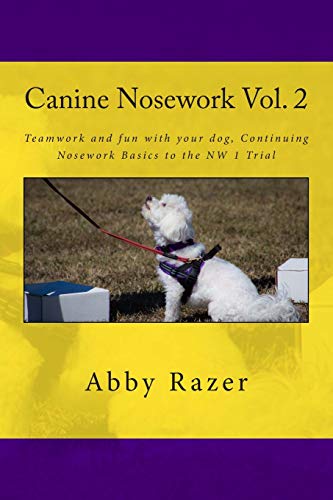 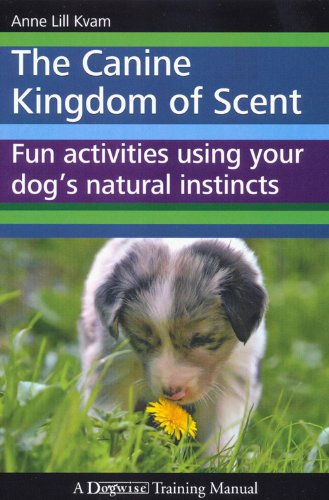